During the Arslan Senki/アルスラーン戦記 event “Yashasiin! Carnival!”, a new anime series based on it was announced for 2016.

However there isn’t much information beyond the short blurb.

The synopsis of Arslan Senki:

“Betrayed from within and overwhelmed by dark sorcery, the valiant armies of Pars are overrun by the warrior-fanatics of Lusitania. Escaping the destruction of his homeland, the heroic Prince Arslan begins to assemble a group of five, extraordinary allies—a priestess, an exiled warrior, a mischievous minstrel, an insightful artist and his attendant—to aid him in his fight against the Lusitanian invaders. Together, they must build an army and defeat 300,000 trained soldiers—including the mysterious Lord Silver Mask—who has also laid claim to the throne of Pars.”

The expected casting will be Kobayashi Yuusuke (Witch Craft Works) as Arslan, Hosoya Yoshimasa (Free!) as Daryun, Namikawa Daisuke (Hunter x Hunter) as Narsus and Hanae Natsuki (Tokyo Ghoul) as Elam. The just concluded 2-cour series is directed by Abe Noriyuki (Bleach, Yu Yu Hakusho) with composition of the series fell to Uezu Makoto who did Akame ga Kill! and key animation will be done by Ogiso Shingo (AnoHana). It is not known if the staff will stay on or not.

Stay tuned for more updates in future, but in the mean time, check out the announcement teaser below: 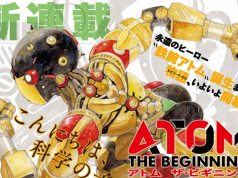 Atom The Beginning greenlit for TV series – the Astro Boy prequel is getting an anime.

These adorable “Bananyas” are getting their own TV series